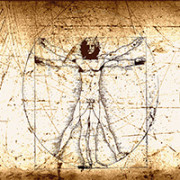 Where does the man come from? Science been looking for centuries, has he been created by a God? Has he evolved from an ape? And why does the man does as he does, why does he run around and all, what for? Science searches for an answer and digs and digs. Science has dissected and disassembled man. Science has found out he consists of molecules and atoms, really small particles. And now they place them really small particles into giant machines that spin them around and make them collide into each other, to find if there are even smaller particles behind it. Where does the man come from, the answer has to be behind one of them particles.

Place the woman next to it! And you got the answer. That’s where the man comes from, that’s why he runs around, that’s why he does what he does. Place heaven next to matter and you get the answer. That’s where matter comes from, that’s why matter moves as it does. Universe appears to be a balance between man and woman, between matter and heaven, between being and not being. No use digging any deeper, the answer is right at the surface in everything you see around you.

Is Earth the dumbest planet?
Scroll to top