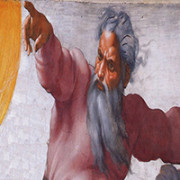 There is no God, finally proof that God doesn’t exist. Or rather a complete explanation of the universe without needing a God for it. You can explain the complete physical world with fully provable logic by placing matter in polarity with heaven. All behavior of matter explained, with the final conclusion that the universe consists of two entities, matter and heaven, or man and woman, being and not being. The cosmos appears to be an Omni Creative balance of two extremes that cover everything that IS and what ISN’T. Just like you don’t need a God to create children, but a man and a woman, you don’t need a God to create a universe. What you need to create an universe are two entities of ‘being’ and ‘not being’. What comes out next is matter standing in full polarity with heaven and explodes because of this and splits up into the tiniest bits and follows the endless long evolution to find a continues better balance of being standing in full difference with not being. The universe is an Omni Creative balance of two entities that cover everything. It is explainable, it is logic, it is provable, it fits perfect and there is no God involved. We are God ourselves, our consciousness, who we are, that with what I write these words, is the same as what created whole universe. I’m just a small slice of it. God is all that IS and what ISN’T, literally. So no man with a beard, no fantasy, no believe, but research and logic of cause and effect and being absolute sure.

Earth is not flat

The immaterial revolution
Scroll to top