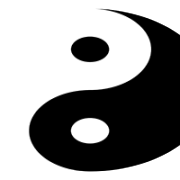 How incredible dumb can a society be, when a whole planet supposedly responsible for its own existence trying to do this in the best way possible. You would expect science to be responsible to research the truth. For centuries and centuries man been looking for the truth upto the 21th century where we got mobile phones and flatscreen tv’s and fighterjets and then it appears that how the cosmos works has already been discovered 2500 years ago, a stupid simple balance. Just like the balance between a man and a woman, this is everything already complete, this is how the universe works. Two opposite entities that cover everything, being and not being, heaven and matter, woman and a man. Together they are able to create children, from scratch, together it is complete. This is exactly Taoism, exactly like Confucius or Loa Tzu described it and a lot better as I ever could. They describe the way of being, being which is standing inside heaven. Being underneath heaven, this is what beingness obeys to. It fits perfectly and exactly on our physical laws, you place heaven in difference with matter and you understand where the tension comes from. Matter is standing with all its mass in complete difference from heaven, which is a real field. And that’s why the matter explodes and makes itself as tiny as possible and moves like madness and goes through billions of years of evolution to find a higher balance. It is perfect, it is excellent, sublime, unbelievable simple and infinitive intelligent, what a system. And our scientists didn’t see it, they kept looking along the extend of matter itself, like there has to be another particle explaining the first. That everything is a balance, didn’t cross any scientist mind, because the balance would come around at yourself, when a scientist looks always away from himself and analyses everything away from self. And of course the fact that unification has become the highest emotional discovery ever, which makes it almost impossible for anyone looking for it. But unification appears childish simple and isn’t even new, it’s exactly like Taoism, except back then they didn’t know anything about molecules and atoms and now we do.

Earth is not flat
Scroll to top