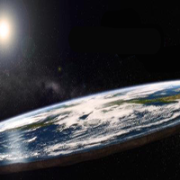 Earth is not flat, it is round. They used to be sure that it would be flat, if you would go too far away, you would fall off. Sounds pretty insane right? Yet current science is still looking for an answer like the earth is flat. Because they think that the whole universe is matter and is looking for a particle behind every other particle. Like you walking down a long road on a flat earth looking for the answer. But the earth isn’t flat, it is round, you wind up back at yourself if you go search. Just like that with the whole universe, you can search what you like, but eventually you wind up back at yourself. Because the earth is round cause it’s standing inside heaven, it is an Omni Creative balance together. Just like that science is wasting its time looking for the edge of everything, outside itself. When the earth is round, when the final truth is a balance and eventually you wind up back at yourself. This ridiculous stupid science is still today, just as stupid when they thought the earth is flat. Just like that science refuses to see why the earth is round, refuses to see that the cosmos is a polarity, between matter and heaven, just like between a man and a woman, coming eventually together inside yourself.

Taoism is unification in science

There is no God
Scroll to top