Can’t get Unification out 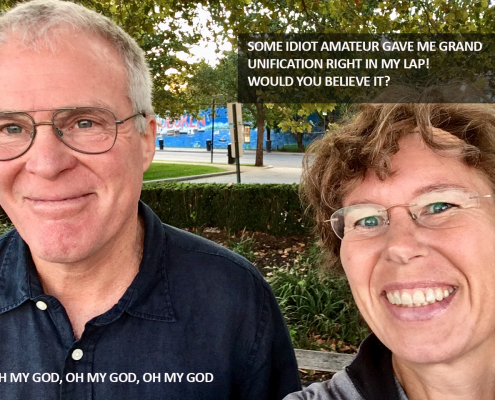 I found grand unification because I was looking for something real in a world that gone totally foolish. Everything dissolved into this experience of infinity and only months later I realized it’s unification in physics also. I figured if I tell anyone then people will get wild and it will spread around the world because it’s so simple and it fits perfectly. I was very wrong because it has been the hardest thing to get anyone to listen, for anyone to take it serious. Everyone tells you to go to a scientist, but these scientists are the most stubborn arrogant snobs you can imagine. You can’t even reach any scientist and when you do and claim you got unification then they’ll think you’re nuts, let alone when you claim the cosmos is a simple balance. These scientists are really posh serious academics that think they’re the most important people and they’re not even open to listen to some civilian who claims to have unification, they already know for sure it’s another lunatic with a crackpot theory. I’ve been everywhere and it just doesn’t work, scientists are the last people in the universe to accept that the cosmos could be one simple polarity unifying everything. They’ll get angry even, because if I be right, then science would look really dumb, then science has made a colossal mistake for centuries. I’ve never even got an answer from a scientist and I hardly ever get a serious reaction from people. The cosmos is just man/woman, matter/heaven? One polarity unifies everything? People don’t respond, they don’t ask questions, nothing. Make a website, write a book, mail the newspaper, but I get zero reactions and I get obstructed everywhere. People just sit back and think like ‘Well, if he got unification then I wait till it’s on TV’. They wait till I become a hero or something, but I’m a nobody and I crashed when the world gone wrong. That’s why I found unification but I need help, I need to discuss it, practice it but I get nothing. Got this website for years and never once a serious reaction or question, when in fact I unified all of science. I find out everyone is on Twitter and I start harassing all the scientists with all the answers for years and people just won’t accept the cosmos is one simple polarity. What do people want? They want perfection, they want a show, they want a hero, they want a leader they can follow and get behind. They won’t get behind some fool with the truth. The popularity game is more important as having the truth or not, which strongly demotivates me. I get some celebrities who acknowledge me from a distance, they see I might be right, they can imagine science has been hooked up wrong for ages, something standard civilians can’t imagine. But even the celebrities just stand back and wait till it’s on the news or something. There has been a German scientist on Twitter, Sabine Hossenfelder that I harassed since 2016 for years and she has understood me. Suddenly she gone straight against science with full confidence and written her first book ‘Lost in Math’ and first word in it is ‘heaven’ as a mean joke. She never spoken to me once but she reacts on everything I do and I’m about 90% she has stolen my unification and will soon come with her second book that will be actual grand unification causing a worldwide revolution. No one listens to me, but they’ll listen to an official scientist claiming the exact same thing that the cosmos is a single polarity just like Taoism. I can’t get unification out, but she can. I tried writing articles for official journals but they always turn me down, you really can’t as a non academic. They’ll think she’s the greatest scientist ever, but she stole everything from me. One simple polarity unifying everything, everything dissolved and it will literally enlighten mankind. People won’t know what will hit them, how this simple unification will change all of mankind and society…this is biblical. There is so much, so much in this simple unification, it is such an emotionally loaded subject, it is a miracle I even found it. But afterwards when people will see it, they’ll claim they’ve always known and would have found it too…cause it’s so obvious. But they didn’t see it, not for thousands of years exactly because it’s so obvious. I did it and went through hell and back, totally crashed and having to reach moment of enlightenment to find it. And now it probably is stolen by this evil german scientist who wants to become rich and famous. I can’t register it anywhere like one can with a patent, you can’t register a scientific discovery anywhere and claim you found it. The biggest discovery ever, but if she has stolen it, then at least it’s coming out into the world. I could get hit by a bus tomorrow and die and it be gone and no one would know the Tao actually unifies physics, then I rather have it stolen by some selfish scientist. Then I did my job and got unification out into the world, even though no one will know it was me.

In meantime I keep trying myself, trying to write a book, trying to stay alive to just get unification out into the world, trying to find someone who might listen.