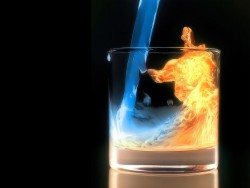 Polarity is when two things are in opposition. Everywhere around us are polarities, the difference between high and low, between water and fire, hot and cold, fast and slow, fat and thin, plus and minus, black and white, good and bad, young and old, north and south, light and darkness. Everything seams to be a polarity, with a tension and movement between the two as effect.

The whole universe appears to be a polarity, because you can unify all differences around you with the biggest contradiction possible: BEING vs NOT BEING.

Being standing opposite to not being, matter standing opposite to heaven. A gigantic big polarity that covers everything. It covers everything that is and everything that isn’t, there isn’t anything more. The effect is the big bang and the physical laws created by the polarity between the two. The polarity between matter and heaven causes the tension. That’s why matter moves, makes itself as tiny as possible, leans against others and is standing in a negative or positive split and is looking continue for a better balance, because it’s standing with all its mass in difference with heaven.

Science been looking for centuries for the explanation of the behavior of matter, why does matter move? Still thinking there be a particle behind the other particle that still needed to be discovered, just have to dig for it. But if you just place all matter in difference with the field around, then the difference reveals the cause of tension, the universe turns out to be one giant polarity. On human level this polarity turned into male and female.

Can the whole universe be one giant polarity between two things?

Could you explain the whole universe by placing all the matter in polarity with the empty void around?