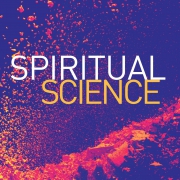 I’m not the only one who sees science is seriously lacking in its material tunnel vision, i found this incredible academic writer ‘Steve Taylor’ who writes one after the other book about stories of enlightenment from regular people and how science is failing not capturing the truth. This book handles in detail how science needs spirituality to make sense of the world. He comes with piles of evidence of the spirit realm behind the physical world. Scientists are so stubborn and expect a particle to explain every other particle, not realizing how their own immaterial consciousness is the final answer that already covers the entire universe. There’s people left and right everywhere coming with evidence about the paranormal and science is being driven in a corner, until they learn their own consciousness is the answer. But scientists love to escape and will always have some excuse to not see enlightenment, cause that’s the most scary thing….to be dissolved into infinity, one with the cosmos. Even this genius writer doesn’t see spirit has a structure unifying science, tried to explain him on twitter but they never understand how entire cosmos could be just being and not being, unifying it all. It goes against all their expectations of some grand unification, it could never be this simple. Or at least that’s what i’m guessing, cause they never explain either why they turn down my unification.